Unique, genius, and minimalist…. Tesla Model 3’s HVAC system is a step toward the future.

After digging the internet for a whole day, I’m here to share some credible owner-reviewed information about the Model 3’s air conditioning system.

Let’s tear down the Model 3’s AC system to explore its various aspects such as aesthetics, usability, convenience, and a lot more through this conclusive guide.

Model 3 HVAC: A Step Toward the Future

When you get into a Model 3, the first thing that will catch your attention is the dashboard… a clean and minimalist dashboard.

There are no AC vents or any other cutouts for other controls—just a steering wheel and a center touch screen.

Where are the AC vents then? Well, that’s the magic in there.

Air Vents: Are They Different in the Model 3?

Traditionally, we see rectangular or circular air vents in most cars, even in Tesla’s Model X. 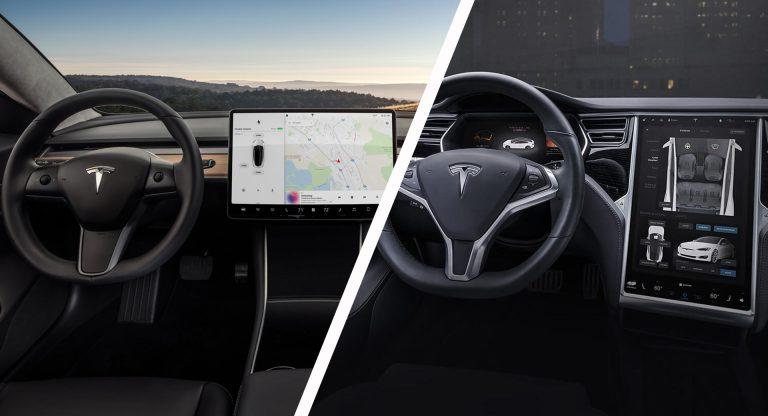 A visual comparison between the Model 3’s and the Model X’s interior. Credit to Carscoops

In the Model 3, there are two air vents (vertical and horizontal) that spread along the width of its dashboard. They’re designed in a way that they can’t be easily noticed.

The vertical vent is also referred to as bleed vent and the horizontal one as wave vent.

That’s not it. Again, there’s some impressive engineering behind this.

The wave vent has a higher aspect ratio compared with the bleed vent, which enables it to have two-dimensional properties.

Adjusting the vents left and right is again different in the Model 3. There are gates present deep inside the dashboard which shift the direction of the air.

Then there are vents at the feet like standard traditional cars.

All of these electrically function through the touch screen popped out at the center of the dashboard.

The rear vents, however, are like the traditional ones. Two rectangular vents are provided on the rear and placed between the passenger and driver seats.

They’re also electrically powered and controlled, but you can manually change the angles in both horizontal and vertical directions.

To provide maximum indoor air quality, Tesla is using a different technology to control both cooling and heating temperatures using its HVAC system.

In terms of air conditioning, Tesla uses a compressor like the one in domestic fridges, except this one works off 400 volts.

This is located at the front of the car, and it draws power directly from the car’s Energy Storage System (ESS) which is placed in the back of the car. The compressor cools the air before it reaches the AC vent.

In terms of heating, it’s very different from traditional vehicles. There’s an electric heater which again draws power from the ESS.

To control the power consumption, they used a positive temperature coefficient (PTC) heater.

It increases the electrical resistance with an increase in heat, which limits the amount of power drawn from batteries.

Good news! This extends the driving range of your Model 3.

Adding these innovative air vents brings some major advantages, such as increasing the aspect ratio and adding to the minimalist look that Tesla has been pursuing in its vehicles.

Adjusting the Vents in the Model 3’s Climate Control

Time to take control of your Model 3’s HVAC system.

This can be done through the center console.

The climate control is set to Auto by default. This maintains optimum comfort in most weather conditions, except for the most severe ones.

Let’s have a detailed understanding of the Model 3’s climate controls:

What Each Number Denotes in the Above Picture:

1. Touch to turn the climate control system on or off.

2. Touch to adjust the climate settings for the front cabin.

3. Choose where air flows into the front cabin (windshield, face-level, or foot-level vents). You can choose more than one location.

4. Touch to adjust the climate settings for the rear cabin.

9. When in Park, these settings display to allow you to keep the climate control system operating, even when you leave your Model 3 (see Keep Climate On, Dog Mode, and Camp Mode).

10. Touch to adjust how air flows from the front vents (see Adjusting the Front Vents.)

11. When your Model 3 is in Park, touch Schedule to set a recurring daily time when you want your Model 3 to be ready to drive by preconditioning the battery and cabin climate and/or charging during off-peak.

13. Use the slider to adjust the fan speed.

14. Touch to turn the air conditioning system on or off. Turning it off reduces cooling but saves energy.

17. Touch Auto to turn the Auto setting on or off.

Airflow direction can be controlled from each vent once they’re turned on.

NOTE: Splitting up a vent into two separate airflows is not as strong as the combined airflow in a single direction (Source: Tesla).

Rear vents are located at the back of the center console.

Watch this YouTube video from Mark Dickinson to learn more about operating the AC vents in the Model 3:

The Model 3 is amazing! It keeps your cabin temperature even when you’re not there.

I would certainly want my car to maintain its inner temperature after I step out of it in minus temperatures or on a hot summer day.

The Model 3 does that favor through the “Keep Climate On” feature.

To operate Keep Climate On, 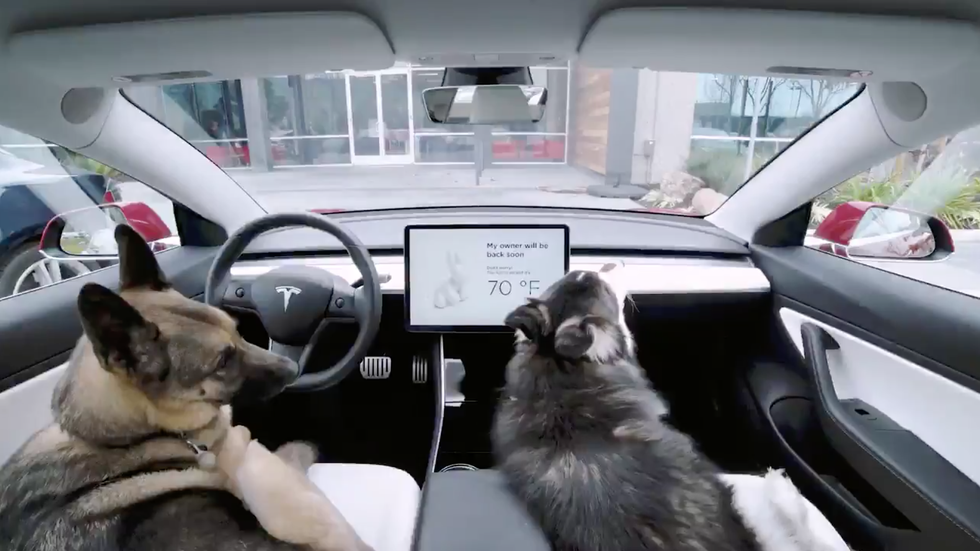 Dog Mode is not just for dogs; your cat can also take advantage of it.

It’s introduced by Tesla so you can monitor the cabin temperature when you’re leaving your pet inside the car.

This can be controlled through your mobile app.

The touch screen displays the temperature so that people passing can see if the pet is safe.

You must be near your Model 3 to use this feature because in some conditions when the temperature can no longer be monitored, you may have to return to your car.

Sometimes, you have to stay in your car for long hours. Camp Mode makes it convenient for you.

Toggle into Camp Mode and your Model 3 will conserve energy by drawing energy from low-voltage outlets to power your center console and USB outlets and maintain the inner temperature.

You can watch shows, play games, or browse the internet through your center console.

Also, you can use your paired phone as a remote to control climate and media settings.

Overheating is a big problem, but you don’t have to worry much if you’re a Model 3 owner.

The Model 3 has a cabin overheat protection mechanism which can be directly controlled from the center console.

This maintains the inner temperature of your car in extremely hot conditions for 12 hours after you leave your car.

To turn it on, hop on to the settings.

NO A/C: Only fan operates when cabin temperature exceeds 40°C (consumes less power, but the temperature may exceed 40°C).

Cabin Overheat Protection operates until 12 hours have elapsed since you exited your Model 3 or until the battery energy drops below 20%, whichever comes first.

Never leave children or pets in the vehicle unattended. Due to automatic shut-off or extreme outside conditions, the inside of the vehicle can become dangerously hot even when Cabin Overheat Protection is enabled.

Some Model 3 owners have raised concerns regarding its AC system. What are these issues and how to deal with them? Let’s cover them in this topic.

AC Is Weak or Not Working

If your Model 3’s AC is not functioning properly, the fault might be mechanical or digital.

Here are some major reasons that might cause this problem:

To restore the operation, get the concerned part repaired or replaced.

Performing a full rest or restarting the system can solve this problem.

If you’re a new Tesla owner, you need to know that the following can cause your car to make noise, but they don’t require a trip to the service center:

Except for these conditions, if your Model 3 is making any noise, you need to be a little concerned—like if your compressor is still making sound after your car has been turned on for some time or you’re using optimum settings for your AC.

Some Tesla owners have made a clever hack to control the sound by insulating the AC compressor. This way, the sound can be silenced to a certain extent.

So the Model 3’s AC is not dead silent, but if you still want it to be quiet, you may try insulating your Model 3’s AC compressor or installing noise cancellation retrofitters to your car.

Well, it’s not just Tesla that experiences this issue. Almost every car is prone to it.

Here are some reasons that might be affecting your Model 3’s AC odor and solutions to them:

To get rid of the bad odor, try these solutions:

For a visual explanation, watch this YouTube video from EveryAmp:

Issues regarding heaters not working in extremely cold weather have been reported by some Tesla Model 3 and Model Y owners.

The problem is said to have originated from the heat pumps which Tesla has introduced in its HVAC system for efficiency improvements.

Cars equipped with these heat pumps are most affected by heating issues.

Tesla, however, has guided affected users to try the following fixes:

Tesla further added that symptoms can occur in climates -15°C and below, but with the recent cold snap, they’re starting to see even colder temperatures.

So if you’re a new Tesla owner, I have some climate control tips and tricks proposed by Tesla owners and the company itself to save you from troubles.

How to keep my Model 3 cool in summer?

Pre-cooling can help maintain the inner temperature on summer days.

Watch this YouTube video from Lexi Heft to learn more about keeping your Model 3 cool on hot summer days:

How long does a Tesla AC run?

I have laid down pretty much every detail that you should know about the Model 3’s HVAC system.

Unlike traditional cars, it is very different and efficient because it is electrically powered and has many perks.

Concerning the issues reported, Tesla always has a software-based solution, which is the most incredible thing about these cars.

So, with its new features and design, I can safely say that the Model 3’s HVAC system is a step into the future.