This is your one-stop shop to learn everything about the Tesla Model 3 screen.

After extensive research (reading 10+ articles and 30+ forum posts and watching more than 62 lengthy YouTube videos), here I am with an ultimate guide on the subject matter.

So without further ado, let’s get straight to it.

A Single Touch Screen on the Dashboard—Worth It or an Overkill Minimalist Strategy?

An overkill minimalist strategy? Certainly not!

On the contrary, I believe the Model 3 screen is the most practical touch screen any car could have.

Most functionalities are there, including the odometer — which many owners struggle to find.

Let’s say Tesla innovates a new way to take advantage of existing controls and sensors (say, Sentry Mode), then the new controls can simply be programmed into the display.

Lack of usability in certain areas of UI can also be repaired easily over an air update requiring barely any input from the owner.

Had it been manual buttons like most of the other cars, these kinds of updates wouldn’t be possible.

Also, producing a single touch screen is way more feasible than producing a fiddly wiring loom, resulting in a plethora of individual switches, knobs, and dials.

So again, is it an overkill minimalist strategy? I think you know the answer to it. Don’t you?

High-budget Tesla vehicles like the Model S and Model Y come with a display screen of 17″ and 15″, respectively.

The Model 3, despite being the most affordable vehicle in the Tesla line, comes with a sleekly designed 15″ screen, making it no less exquisite than any expensive Tesla vehicle.

Let’s take a look at some more details of the Tesla Model 3 screen per the teardown analysis conducted by IHS Technology Teardown Services:

The main component of a Tesla screen is the map area, but let’s have a more in-depth look at other major components of the Tesla Model 3 screen:

The Model 3 screen has extensive usage, so a bit of wear and tear is, of course, inevitable.

Your Model 3 screen might be subjected to certain cracks, glare, fingerprints, and scratches, etc. as time passes.

But you need not worry!

A famous tech YouTuber Taras Maksimuk gave the Tesla Model 3 screen a real check by giving it multiple hard hammer strokes while driving a brand-new Model 3 to check its durability.

Watch this video to know what happens:

How the Tesla Model 3 Screen Works

The Tesla Model 3 screen works no different than any ordinary Android tablet or an iPad.

However, controlling your vehicle via touch screen while driving can be quite intimidating, especially if you’re not used to it.

Famous EV enthusiast Alex Sibila provided the Tesla community an exciting tutorial on how to operate the Tesla Model 3 screen from scratch on his YouTube channel:

Here’s an overview of the different features offered in the Tesla Model 3 screen:

From adjusting acceleration and steering to locks and lights, all driving controls are on your Model 3 screen.

Per the Tesla Model 3 owner’s manual, tap Controls on the bottom corner of the touch screen to control various features and customize the Model 3 to suit your preferences.

If you find adjusting settings every time you drive hectic, you can also opt for several

shortcuts after you set up your driver profile.

The navigation system provided in the Tesla Model 3 screen is not ordinary.

From navigating to a destination that you selected manually on the map to automatic navigation to your destination based on your synced phone’s calendar, the Tesla navigation is an absolute stunner.

With the help of settings like “I’m feeling hungry/lucky,” your Tesla Model 3 screen suggests nearby places according to your mood.

Plenty of exciting navigation options like trip planner, online routing, and energy prediction depending on the route are available on the Tesla Model 3 screen.

A diverse range of media apps is available on the Tesla Model 3 screen that allow drivers and passengers to vibe along the route, streaming their favorite songs and movies.

You can even kill idle time by playing games or browsing anything when parked or charging at the station.

You can play games on your 15″ touch screen using Tesla Arcade when your car is parked or plugged in.

Tesla Arcade includes nine games if you don’t have the recently refreshed version of the Model S and Model X.

None of these games are very demanding, so Tesla Arcade handles them really well.

Early in 2021, Tesla uploaded this video on their official YouTube channel about the Arcade Mode:

Per the Tesla website, when the Model 3 is powered on, the dashcam records a video of anything roaming around your vehicle.

A dashcam is unable to capture any footage when your Tesla is powered off. This is very helpful in recording driving incidents, such as a collision.

This is how you control the dashcam on your Model 3 screen:

A snippet showing dashcam icons on the Tesla Model 3 screen. Credit to Tesla

Per the Tesla website, when Sentry Mode is turned on, even when your car is locked or in park, the cameras and sensors remain powered on and ready to record suspicious activity around your vehicle.

To turn Sentry Mode on or off, tap Controls > Sentry on your Model 3 screen.

Tesla came up with this really cool idea to increase the security of the Model 3 by adding a PIN (personal identification number) to operate your vehicle just like your phone, tablets, or other gadgets.

According to the Tesla website, you can prevent the Model 3 from being driven until a 4-digit PIN is entered.

To enable this setting, touch Controls > Safety > PIN to Drive and follow the on-screen prompts to create a driving PIN.

In addition to that, you can protect the contents of your glovebox by adding a 4-digit PIN to it.

You can adjust the climate settings of your vehicle by tapping on these few options on your Tesla Model 3 screen (source: Tesla):

By default, climate control is set to Auto, which maintains optimum comfort in all but the most severe weather conditions.

Touch and hold the temperature to customize settings in the climate control screen. You can revert back to Auto at any time by touching Auto.

Tap these options to alter the exterior light settings temporarily:

According to the Tesla website, you can control the different locks from your Model 3 screen:

Child Lock: If on, safety locks prevent the rear doors from being opened from inside the vehicle.

Walk-Away Door Lock: If on, doors automatically lock when you walk away from the vehicle carrying your key fob or phone key.

Driver Door Unlock Mode: Unlocks the driver’s door when you shift into Park. If off, all doors unlock.

Unlock on Park: If on, doors automatically unlock when you engage Park. If Driver Door Unlock Mode is on, only the driver’s door unlocks.

How To Adjust Exterior Mirrors

Model 3 can automatically fold and unfold the side mirrors based on location, which saves you from having to manually position them each time you need to fold or unfold the mirrors when at a frequented place (such as narrow garages, tight parking spaces, etc.).

To perform a single wipe with the windshield wipers, press and immediately release the button on the end of the turn signal stalk.

Doing this also displays a wiper pop-up on the touch screen where you can adjust the wiper settings:

When wipers are set to Auto and liquid is detected on the windshield, the Model 3 determines the optimal frequency at which they should wipe.

You can also access wiper settings from the main “Controls” screen.

Per the Tesla Model 3 owner’s manual:

When you finish driving, shift into Park by pressing the button on the end of the drive stalk. When you leave your car with the phone key and key fob, the Model 3 powers off automatically, turning off the touch screen.

The Model 3 also powers off automatically after being in Park for 15 minutes, even if you are sitting in the driver’s seat.

Although usually not needed, you can power off the Model 3 while sitting in the driver’s seat, provided the vehicle is not moving.

The Model 3 automatically powers back on again if you press the brake pedal or touch the touch screen.

The Pros & Cons About the Tesla Model 3 Screen

Per the Tesla community, here are some major pros of the Tesla Model 3 screen:

Meanwhile, some major cons of the Tesla Model 3 screen are:

These objections about the Tesla Model 3 screen can be resolved if a more robust vocal assistant is provided in Teslas, though—something Elon Musk should think about.

Seeing a frozen Tesla Model 3 screen while driving on the road is an absolute bummer, isn’t it?

Here are a few reasons that could be causing this issue:

Unfreezing your Tesla Model 3 screen is not a big deal. All you have to do is follow these easy steps and you’ll be good to go:

Just do a little soft reset of the computer:

But still, if your issue is not fixed then you are recommended to connect to your local repair center.

This happens due to the memory failure that even Tesla has accepted responsibility for.

A few tricks like resetting the car or car reboot can help you fix the issue. But unfortunately, these are short-term fixes since it occurs due to faulty integrated memory on the processor responsible for the MCU.

4. Yellow Bands Around the Screen

A prominent yellow band appears around the Model 3 screen, especially more noticeable on menu screens where the display is mainly white.

Tesla has acknowledged this issue, and it is mainly caused by sunlight or heat disrupting the bonding between the display and the outer glass.

This issue might even get worse for users in hotter or sunnier climates and might reoccur once fixed if subjected to the same conditions.

Tesla began to offer replacement screens for this in 2017, but after some time, it became clear that even new screens were not able to dodge this issue either.

Although you can fix this yourself, the most appropriate way would be to seek help from the Tesla repair shop.

The Model 3 screen can do wonders; I think this article has established that quite clearly.

New owners always face a difficult time figuring all the functions out, but once they do, their Model 3 experience becomes more interactive and fun.

I have laid down every piece of information about the Tesla Model 3 screen in this ultimate guide. I hope it helps you understand all the features better.

Still, if anything is unclear to you or you’d like to give some suggestions, feel free to comment down below. 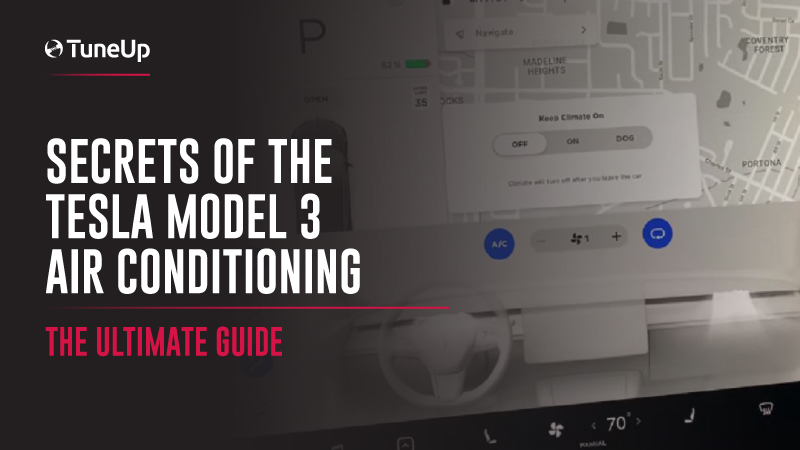 The Model 3’s air conditioning system is one to admire. Learn all about it in this comprehensive guide.