Model 3 owners have long complained about the inefficiency of the Model 3 headlights.

But things changed in 2021, with the refreshed version featuring quite sick headlights that are currently one of the best headlights in the automotive industry.

I’ll discuss everything about the new and old headlights of the Model 3, what changed, what got better and what got worse, and much more in this ultimate guide.

No queries will remain unanswered. Let’s get into it.

Tesla Model 3’s headlights are one of the best performing headlights among its major competitors.

Back in 2018, the Model 3 failed to get into the “good” category of the IIHS (Insurance Institute for Highway Safety) and was granted a place in the “acceptable” category. The reasons included glare and inadequate visibility.

In 2021 though, the IIHS changed the category from acceptable to good, following some necessary upgrades by Tesla in the refreshed version.

Sources state that the new headlights are adaptive in nature too; they’ll follow the curve of the road and adjust the beam automatically to prevent the oncoming traffic from getting blind.

It was confirmed by Elon Musk, the CEO of Tesla, himself while replying to a tweet by Paul Kelly:

But the new upgrade was only launched in non-US markets. Unlike Europe, the United States has rules that make headlights with changing beam patterns illegal.

The 1967 US regulation, otherwise known as the Federal Motor Vehicle Safety Standard No. 108, terminated the production of headlights in which both the low and the high beams operated simultaneously.

This law doesn’t necessarily apply to the latest innovations, such as adaptive headlights.

In fact, Electrek claimed that they saw a memo written to the sales team from the automaker that indicated the launch of refreshed headlights in all markets.

And we’re already seeing proof of the refreshed version launched in the USA. An owner from North America took his delivery and got the refreshed headlights. Here’s the picture he shared:

Richard Symon from Our Signs Limited made a detailed YouTube video, doing a side-by-side comparison of the old and new headlights of the Model 3.

The testing conditions helped to clear out many details that differentiated the new headlights from the old ones and also showed how the new upgrade made them so much better.

How Do You Adjust the Model 3 Headlights?

First of all, don’t do what this owner did! Especially if you have OCD.

So earlier tonight I decided to try to adjust the headlights. I was just going to adjust them down a few ticks because I’ve been getting flashed a lot.

Well, unbeknownst to me, when you hit the adjust headlights button, it auto levels every time (based on who the hell knows what??)! I wish I would have known that! All I wanted to do was adjust them down a little from the current position! Now have no idea where the starting point was for either headlight. The headlights looked amazing before I hit that damned button… now they look horrible, and I really have no idea how they were aimed. With the car’s default leveling, they are aimed way too low.

So now I have to tick them both up like 10 or so ticks (they’re extremely low) and drive around tomorrow night – I’m just too tired tonight. If they’re still too low, I have to hit the adjust button again (which resets back to what the car thinks is right, again), and then go up 11 or more ticks…I have to repeat this nonsense until they look like they did before.

Now adjusting the headlights seems quite a straightforward job. But believe me, it’s not.

That’s why Tesla urges owners to get them adjusted by technicians only. However, technicians aren’t necessary if you have a reputable repair shop in your neighborhood.

A good repair shop will have the right equipment to measure the height of the headlights that otherwise can’t be measured.

Bjorn, a famous Tesla YouTuber, had the adjustment issue, so he took his car to NAF where they adjusted his Model 3’s headlights:

Now if you want to take risks yourself, Darrel from the nukem384 YouTube channel explains the whole procedure, along with the appropriate heights:

Just give it a shot. If you fail, you can always go to a good repair shop and get them to adjust them.

Headlight adjustment of North American cars is slightly different from EMEA market cars. The detailed procedures are shared by Model 3 owners in the following threads:

Aftermarket Headlights for the Model 3

There are very few aftermarket headlight options available in the market, mostly because 95% of owners prefer OEM headlights.

You can’t change the design of the headlights or change them in any way, except by introducing color-changing LEDs.

If a sporty look tickles your fancy, aftermarket headlights are absolutely a solid choice for you because that’s what most of the aftermarket brands are doing.

For this ultimate guide, I could only find one aftermarket brand the Tesla community talked a bit about. Other brands were never discussed or reviewed, so they didn’t make the list.

Cool until I saw the price. Lol

Wonder if they will offer a wiring module that you can install into your existing headlights for us poor folks.

Notice something? Yes, they look sicckkk, but they are hella expensive!!

Luke, the owner of TesLux Innovations, came into the defense of the pricing of his company’s headlights with some solid arguments:

✅ The cost of housings is too high
✅ Super white DRL for both the top and bottom sections of the headlights is used
✅ When you start the car there is a greeting, when you shut the car off the headlights have a goodbye sequence
✅ Lock/unlock and turn signals are all animated
✅ Sentry mode has a sequence as well
✅ On top of the nice glossy black paint which makes the housings look tinted without the loss of light output, you have 2 additional show modes for when you say… are Supercharging?

Here’s a detailed installation video, along with the final looks, from Luke himself:

To summarize, if you want a premium, you’ll have to pay the premium.

Headlights are one of the most expensive parts of the Model 3, and they should be protected from chips even though they can be resurfaced.

If it snows a lot in your area, you’ll repeatedly have to scrape snow off your headlights, and that can really damage the surface of your headlights if it’s not protected properly.

Due to the mentioned reasons and others (aesthetics, etc.), a headlight protection film can be a really worthy investment or, should I say, a “wise use of money.”

I took my sweet time in researching the best Model 3 headlight protection films, but even after a lot of effort, I couldn’t find any brand that the Tesla community liked, except RPM Tesla.

The film is available in smoked and clear versions; you can choose whatever suits your taste. The smoked one gives a mean look, though, that many Model 3 owners love.

The quality is good, installing is a breeze, and looks are awesome. Definitely a bang for your buck.

This is everything there is to know about the Tesla Model 3 headlights. I did my best to cover each subtopic in as much detail as possible.

Yes, you might object to the exclusion of Abstract Ocean’s, Unplugged Performance’s, and some other brands’ headlights in the aftermarket headlights section.

In my defense, I couldn’t get enough data, not in forums, not on YouTube, to back up their inclusion. My objective is to give you the most authentic information as shared by the owners themselves.

If you have any questions or would like to add some suggestions, feel free to comment down below. Want to make your Tesla unique? I've reviewed the top aftermarket Tesla logo puddle lights recommended by owners -- so you don't have to. 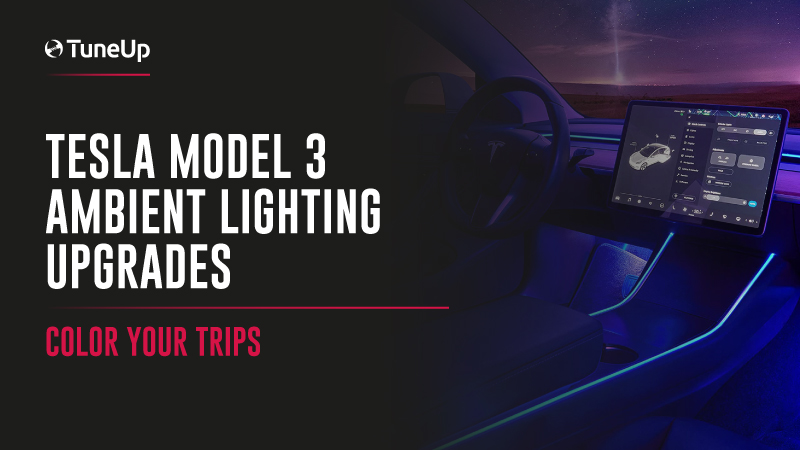